Despite a limited antenna park and a small team of operators, PI4COM was active in the PACC contest last weekend. Not an easy task, but in the end we look back with pleasure.

As is known, our main weapon, the 5el 20m yagi, did not come out of the winter storm unscathed, so we had to promote another antenna for 20m to head antenna. Fortunately, we have a 3el 20m yagi which is fixed on a lower mast. This antenna therefore had to play an important role for our score. After all, 20m is one of the bands which every contest is the basis of the score.

Saturday morning we started early, in good spirit, with the plan to make this antenna “armstrong” rotable, but when the antenna was checked it was not usable. Part of the coaxial cable had disappeared (cut off) and the connection to the antenna itself had been damaged by the vandalism in such a way that a completely new connection to the antenna had to be made. A firm job that took a lot of time. It was only an hour after the start of the contest that this antenna became available and valuable 20m qso’s were lost. 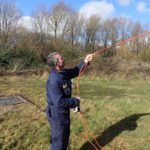 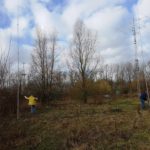 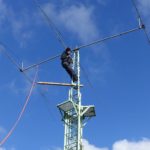 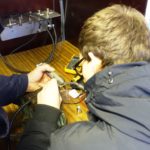 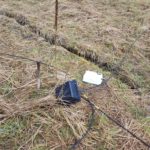 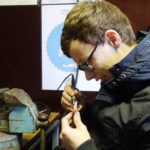 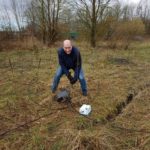 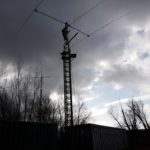 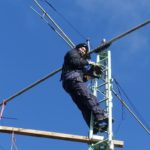 The further building of the station went smoothly. We had chosen to build the 4-square for 40 meters. A lot of work, but this certainly paid off during the long PACC night ….

If Murphy comes to visit then then this usually does not go unnoticed….
The N1MM network also did not work well, so the 2 stations did not communicate with each other. Fortunately, we were able to solve this for the first QSO, but a lot of valuable time was lost again. Also tThe CAT system of one of the stations also did not work well in combination with N1MM. As a result of which all qso’s were logged in CW. In a mixed mode contest very awkward because the software sees all qso’s in SSB as a dupe. Remedy: Work and log everything what calls you and after the contest manually adjust the log based on the frequency.
But Murphy was not finished yet …. After about an hour of contesting we discovered by chance that there were major problems with one of the stations. Why we still do not know, but the 40m CW signal could be heard worldwide at 20m second harmonic and was even shown on the Reverse Beacon Network. Although the station was equal to many previous contests, the signal we were transmitting was  very very dirty. After a long hour of testing and replacing cables etc. the amplifiers of both stations were swapped and the problem was solved. We still do not know what caused it but this was a situation that we do not want to experience again. And of course we lost another 2 hours running on one station and the other station also at half strength.
After these problems Murphy happily said goodbye and we could finish the contest without further technical problems.

At the end of the contest the qso’s on 10 and 15 meters could be counted on one hand and also 20m was disappointing. This band closed exceptionally early on Saturday night. We do not know whether this has to do with our limited antenna but the focus had to be shifted to the low bands very early in the evening. A long night on 40, 80 and 160 meters was the result. But… this was the moment when the choice to build the 4 sqaire paid out. 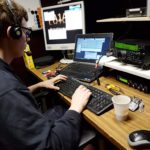 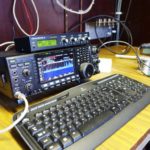 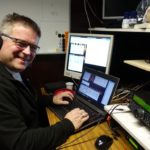 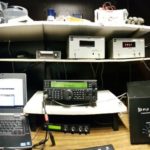 As said before, this contest was not only a technical challenge. With a minimal team, we had to man the entire contest and we managed. A mixed-mode contest such as the PACC actually requires mixed-mode operators for the best result. A lot of mode shifting is important for both the qso number and the multipliers. Dividing the attention in both modes with a “single mode” operator in action means that you have to often change the band, which in our stations means a walk to the other shack/station to take over a band in your mode. Florian PB8DX (SSB) and Rob PA2R (CW) have had that experience as they had the honors for the first 8 hours of operating. Early in the evening they handed over the baton to Ronald PA3EWP and Alex PA1AW who had taken on the long tiring nightshift nightshift. Station 1 rotating over 80 and 160m and station 2 with the focus on 40m. Fortunately, Ronald and Alex work both modes which made no shack change necessary. This had certainly not been a fine task because the weather during the night was really bad. A lot of wind with snow and rain. To walk from shack to shack in that weather is no fun. In the morning the baton was handed to Florian PB8DX and Kees PA3BWD. Because both do not do CW Ronald and Alex had to stay on standby because in the morning there had to be activity in both modes. The advantage of this is that they could do a lot of work in preparation for breaking down the station after the contest would be finished. Despite all the challenges, we were certainly not dissatisfied with the final result: 2145 QSOs with a multiplier of 364 would bring us 780K points. Whether it is enough for a place of honor we will know in due course when the results are checked. Anyway, we have taken the maximum out of our possibilities and that is what counts. Many learning moments and plans for the next contest. We especially hope for a storm and vandalism free period …..